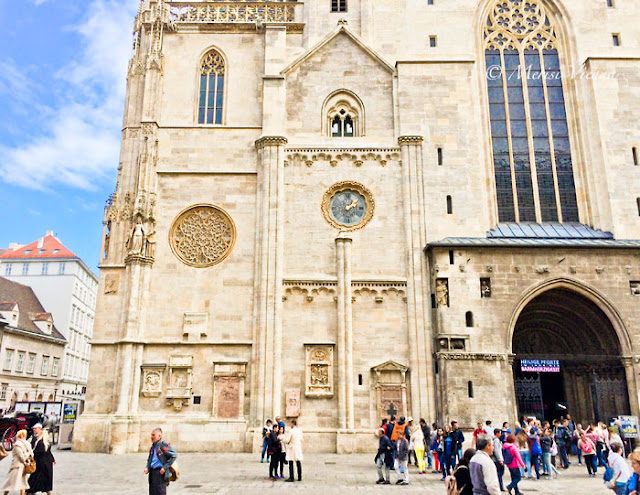 Photographed with my mobile phone camera
on the afternoon of 21 September 2016
Images and Text © by Merisi
St. Stephen's Cathedral (more commonly known by its German title: Stephansdom) is the mother church of the Roman Catholic Archdiocese of Vienna and the seat of the Archbishop of Vienna, Christoph Cardinal Schönborn, OP. The current Romanesque and Gothic form of the cathedral, seen today in the Stephansplatz, was largely initiated by Duke Rudolf IV (1339–1365) and stands on the ruins of two earlier churches, the first a parish church consecrated in 1147. The most important religious building in Vienna, St. Stephen's Cathedral has borne witness to many important events in Habsburg and Austrian history and has, with its multi-coloured tile roof, become one of the city's most recognizable symbols.

The church was dedicated to St. Stephen, also the patron of the bishop's cathedral in Passau, and so was oriented toward the sunrise on his feast day of 26 December, as the position stood in the year that construction began. Built of limestone, the cathedral is 107 metres (351 ft) long, 40 metres (130 ft) wide, and 136 metres (446 ft) tall at its highest point. Over the centuries, soot and other forms of air pollution accumulating on the church have given it a black colour, but recent restoration projects have again returned some portions of the building to its original white
Quoted from Wikipedia: St. Stephen's Cathedral, Vienna
Posted by Merisi at Thursday, September 22, 2016