Summer in the City
Going for a Fiaker Ride 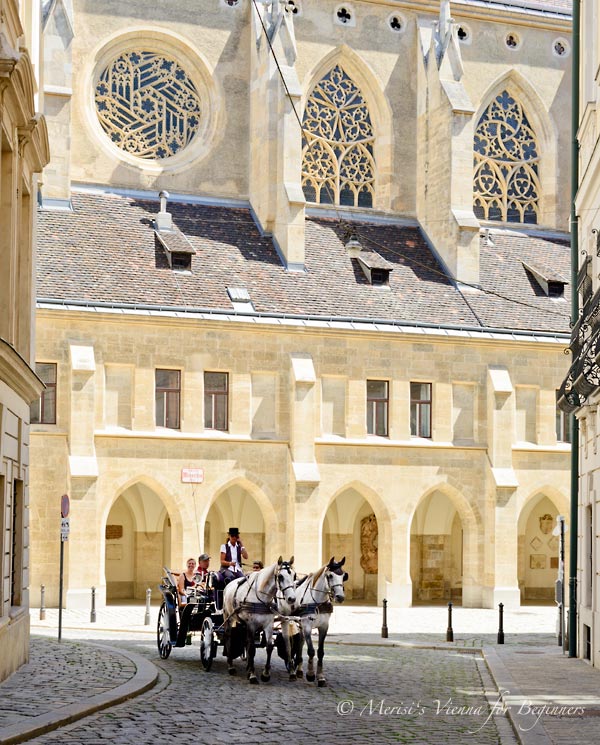 Fiaker leaving Minoritenplatz
Photographed from Metastasiogasse
In the background the Minorites Church -
Italian National Church of Mary of the Snow
Image © by Merisi
Link:
-> Minoritenkirche - Minorite Church @ Wikipedia:
"The Minoritenkirche (English: Minorites Church, related to the monastic order of the "Minor" or Franciscan monks), formally called Italienische Nationalkirche Maria Schnee (English: Italian National Church of Mary of the Snows), is a church built in French Gothic style in the Altstadt or First District of Vienna, Austria.[2]

The site on which the church is built was given to followers of Francis of Assisi in 1224. The foundation stone was laid by Premysl Ottokar II in 1276. Duke Albrecht II later supported the building process, especially the main portal. The Gothic Ludwig choir was built between 1316 and 1328, and used as a mausoleum in the 14th and 15th centuries. Construction of the church was completed in 1350.

When Joseph II gave the church to the Italians as a present, they transferred the name Maria Schnee ("Mary of the Snows") from a nearby chapel which was subsequently destroyed."
Posted by Merisi at Wednesday, July 15, 2015