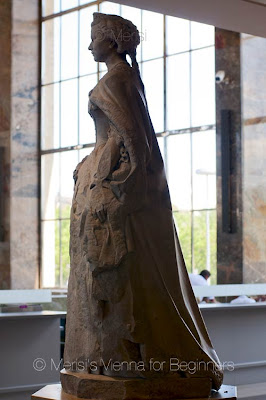 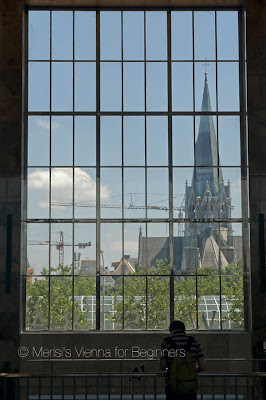 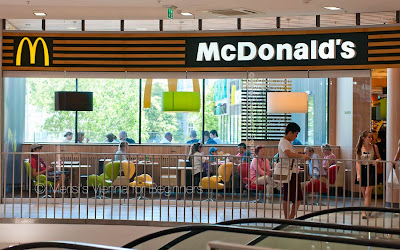 McDonald's at Westbahnhof
McDonald's and McCafé
in prime locations -
great to have them, but there
are also branches of local bakeries
and stores that cater to a traveler's needs,
from Treschnievsky's open-faced sandwiches
to Vapiano's pizza
and international dailies and magazines "In April 1945 the station was hit by bombs and burnt down in the course of battles attending the end of World War II; the roof of the gallery collapsed. After the end of the war, the buildings were by necessity adapted for the needs of rail travel, but a complete reconstruction was decided upon, so the station was torn down in 1949.
A statue from the original facade of the station of the namesake of the original railway Empress Elisabeth still recalls the old station in the lower hall of the new Westbahnhof."
"The rebuilt Westbahnhof designed by Architects Hartiger & Wöhnhart opened in 1952."
Quoted from Wikipedia
Links:
-> Wikipedia's Westbahnhof entry, including information about the recent major renovation and new construction
-> Stores and Facilities at BahnhofCity Vienna West
-> VAPIANO at Westbahnhof
-> McCafé in Vienna (trust me, their Viennese Coffee Melange is excellent!)
Photographed Sunday Morning
Images and Text © by Merisi
Posted by Merisi at Monday, June 25, 2012